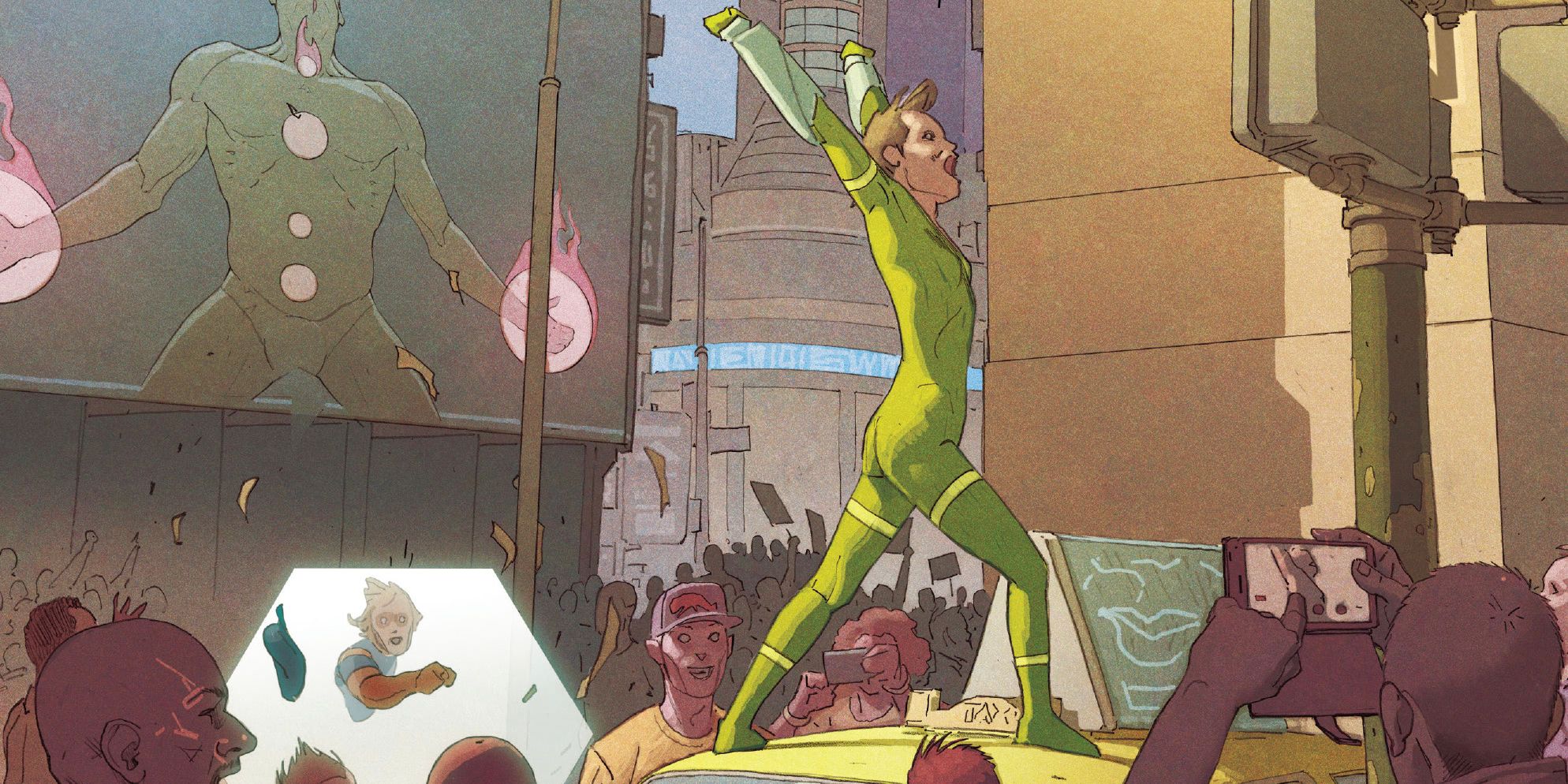 Since nowadays big companies like Marvel and DC Comics have transitioned away from being strictly publishers to the business of brand managers, it isn’t often that canonical changes are made to the status quo of a major series. Too often these changes come off as contrived ways to boost sales, say, for example: killing off a character, only to bring them back a few months later. The key is making small, iterative changes that fit with the internal logic of the characters. It also helps when the intellectual property in question doesn’t have a massive, planet-wide following of die-hard fans who are protective of the character(s) they love.

This year’s reboot of the Eternals, from writer Kieron Gillen and artists Esad Ribić and Matthew Wilson, is a perfect example of how small, but foundational changes can be made to a series. Eternals #1 is out, and fans are getting a series that remains true to creator Jack Kirby’s original vision, while still giving new readers compelling reasons to dive into the book. Kirby’s Celestial-born protectors are back on comic book store shelves, but with a few notable alterations.

Related: The Leader of Marvel's Eternals Has Just Been Murdered

The series appropriately begins with a reboot of the Eternals themselves. After his rebirth in The Exclusion, Ikaris is instructed by the Eternal Prime Zuras to free Sprite. Sprite, otherwise known as the Eternal Child, has been excluded—meaning imprisoned—for centuries after she went mad and attempted to destroy The Machine, which governs, among other things, the cycle of rebirth which makes their species effectively immortal. In previous runs, Sprite has always been depicted as a male child, but when The Exclusion capsule opens, a girl version of Sprite emerges. Neither Ikaris nor Sprite make any mention of the change. In fact, Ikaris is far more concerned with the potential chaos that will ensue as a result of her release than any aspect of her appearance. By all accounts, everything is as it should be. It isn’t until the two teleport to New York City that the modification is brought up. 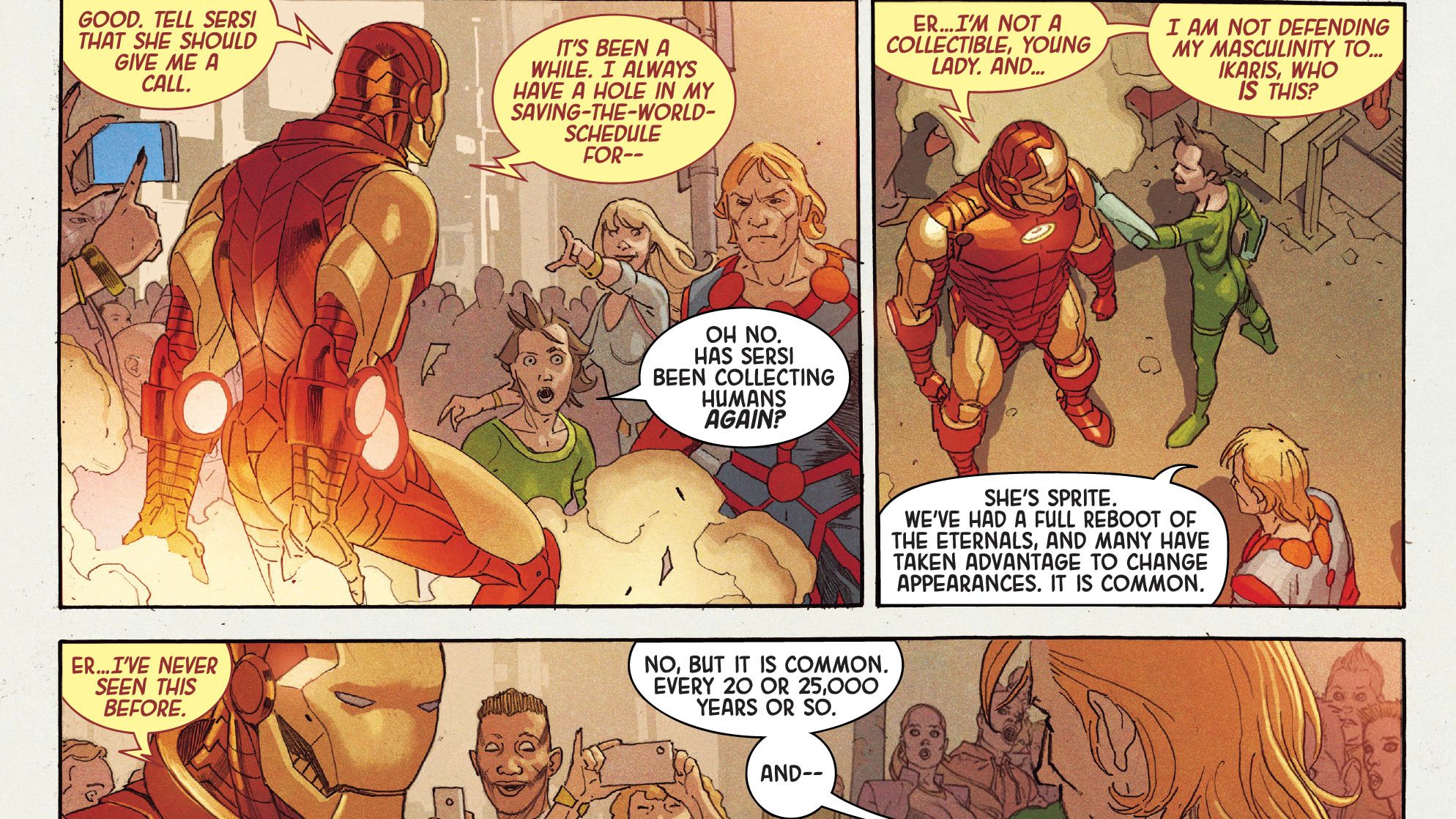 Their bold reappearance in NYC quickly draws the attention of  many, including one of Earth’s Mightiest Heroes. Iron Man is quick to arrive on the scene and investigate the return of the Eternals. As Ikaris is painfully aware, the last time Tony Stark encountered his people, their society was imploding in a violent conflict. Fortunately, Stark doesn’t appear overly concerned—it isn’t as if there’s much he can do about their presence. He is, however, so thrown off by Sprite’s new body that he doesn’t recognize them. Ikaris explains that they’ve had a full reboot, and that it’s common for their people to take advantage of these cycles to change their appearance. By human standards it doesn’t happen often, every 20,000 or 25,000 years or so, Ikaris clarifies, but, considering the Eternals nigh-infinite lifespan, it’s often enough. What’s more, the transition is seen as an entirely natural, even expected, one for Eternals to make, which shows that gender for the ancient beings varies over time and isn’t fixed.

Those familiar with the upcoming MCU adaptation of the comic will know that the role of Sprite has already been gender-swapped with the casting of actress Lia McHugh in the role. This is fitting, as the Eternals’ gender fluidity is true to the internal logic of the ancient, and highly advanced superhero team. More than that, it gives the reader valuable insight into the psyche of beings whose life experience is far removed from that of humans. It’ll be exciting to see what other surprises this storyline has in store for readers.

Next: Marvel Comics Reveal All 100 Eternals Ahead of Their MCU Debut