Friends: Every Wedding Episode, Ranked (According To IMDb)

Some of these are charming, heartfelt, tear-jerker episodes that fans love. Others, especially those where secondary characters are getting married, aren't quite so popular. But with the least-liked wedding episode (according to IMDb, anyway) still managing a score of 8.1, there's no doubt that all of these are worth a re-watch. 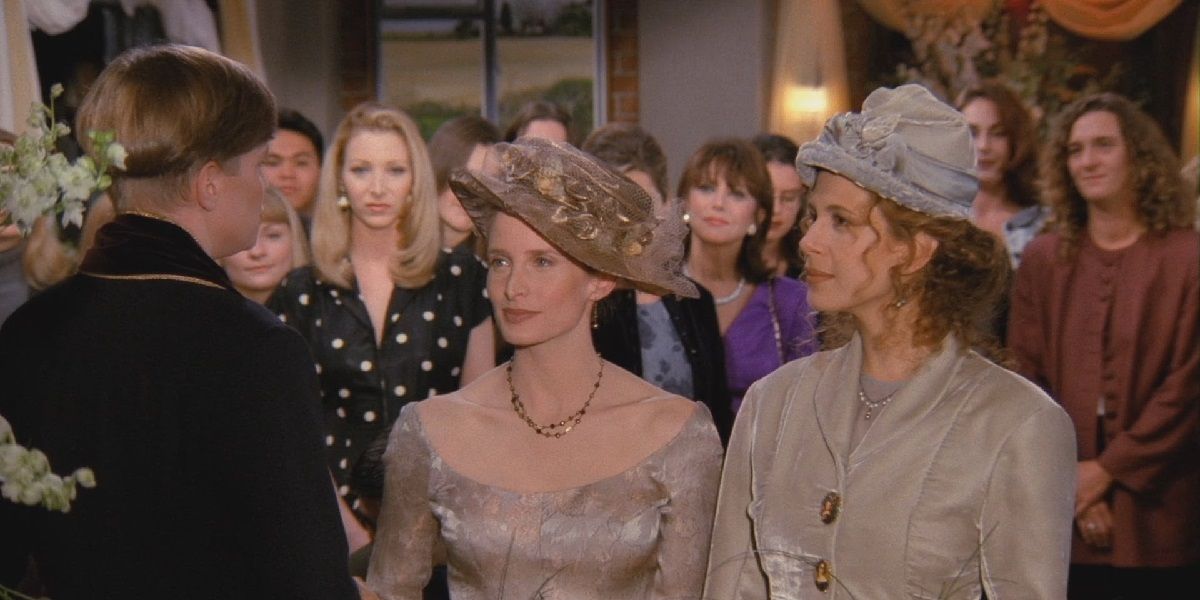 This is one of those episodes that didn't age particularly well, despite the fact that it was seen as progressive at the time (seeing a lesbian couple, let alone a lesbian couple with a child getting married, was a rarity on network TV in 1996). This season two episode was centered on Carol and Susan's wedding, but of course, the main plot was about how the Friends gang were affected. Ross was having his usual freakouts about the entire situation, and was unimpressed that Monica had agreed to cater it. Phoebe, meanwhile, was possessed by the spirit of a client who died on her massage table, and started acting like a stereotypical older woman, only finally departing when she had 'seen everything'. 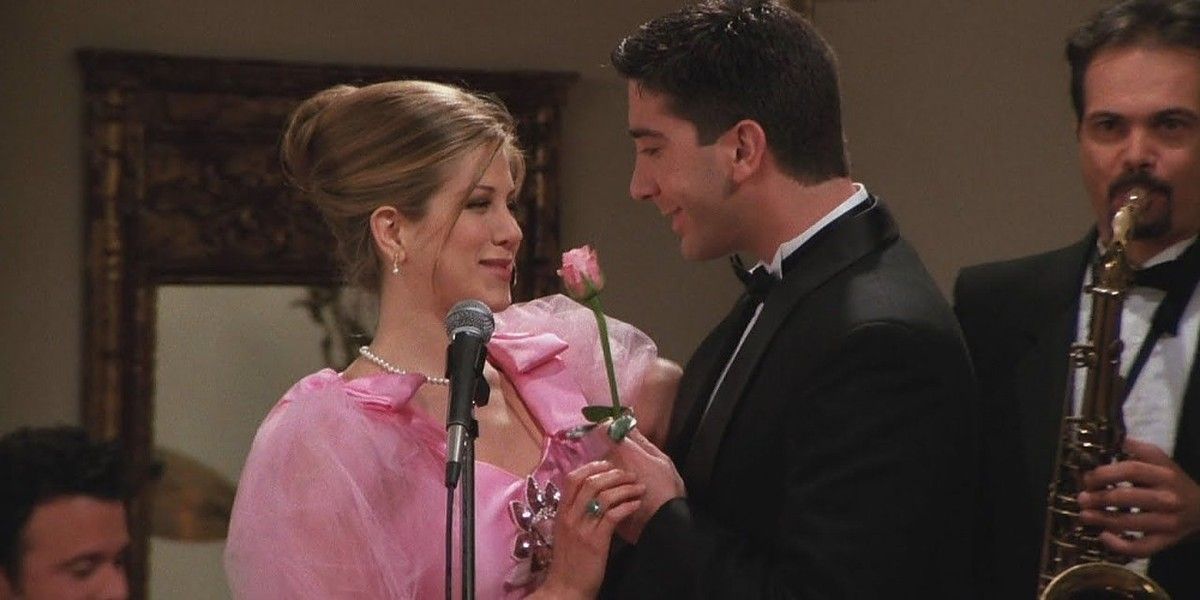 Like 'The One With The Lesbian Wedding', this episode is theoretically about the couple getting married, but is actually just about Ross and Rachel. In it, Barry (the man Rachel left at the alter) is getting married to Mindy (Rachel's previous best friend, who was cheating with Barry at the time). Mindy still asks Rachel to be her maid of honor, and Rachel actually accepts... only to be dressed in a hideous pink ballgown and paraded through a room of people who have been told she left Barry because of STD-related insanity. Hideous as it all sounds, it is actually a solid episode for Rachel, who is just starting to learn to stand up for herself, and the choices she makes, as she gives a speech about how she actually left Barry because she didn't love him. 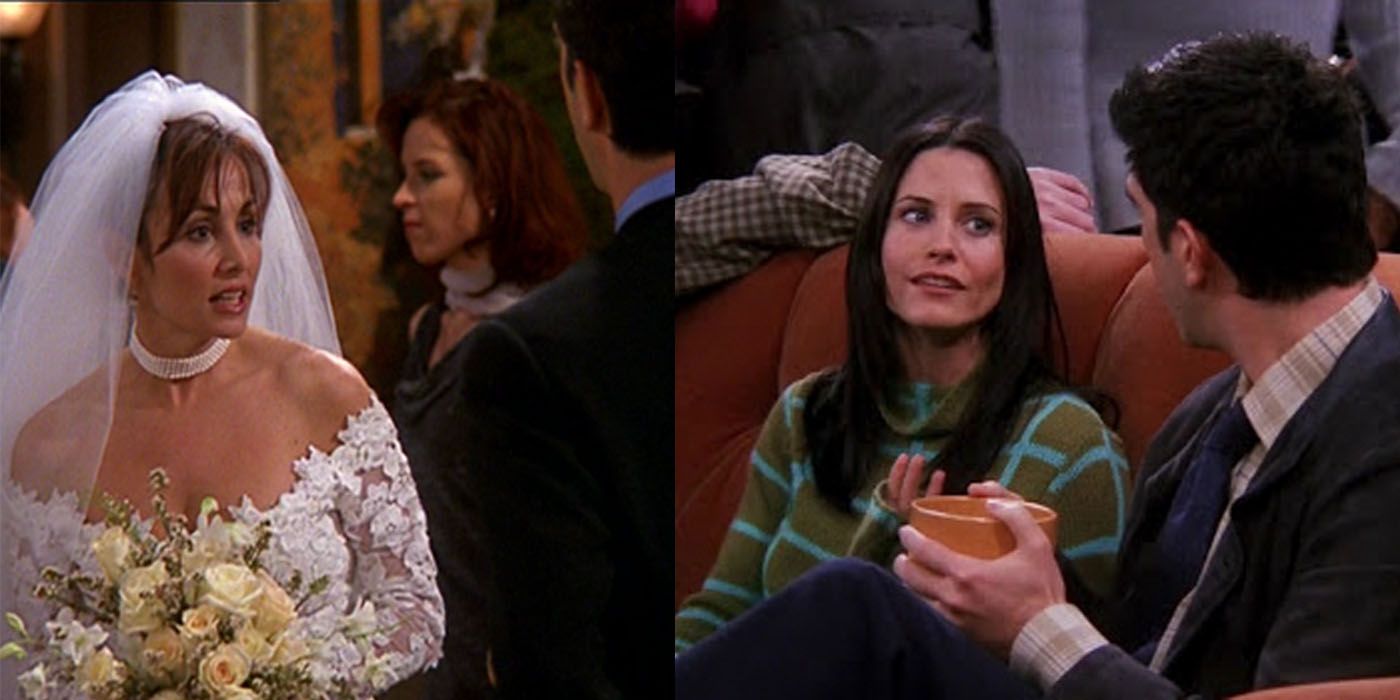 This episode is much better known for the second storyline, about Rachel and Chandler accidentally (and then intentionally) stealing a neighbor's cheesecakes. However, there is a another, significantly less funny, wedding story here too. In it, Ross is invited to Cousin Franny's wedding, but Monica isn't - and in typical high-strung Monica style, she flips out about the snub, eventually forcing Ross to take her as his guest. Their part of the episode ends with the reveal that Monica wasn't invited because Franny was marrying one of her exes... an awkward-but-funny gag, but definitely a forgettable one. 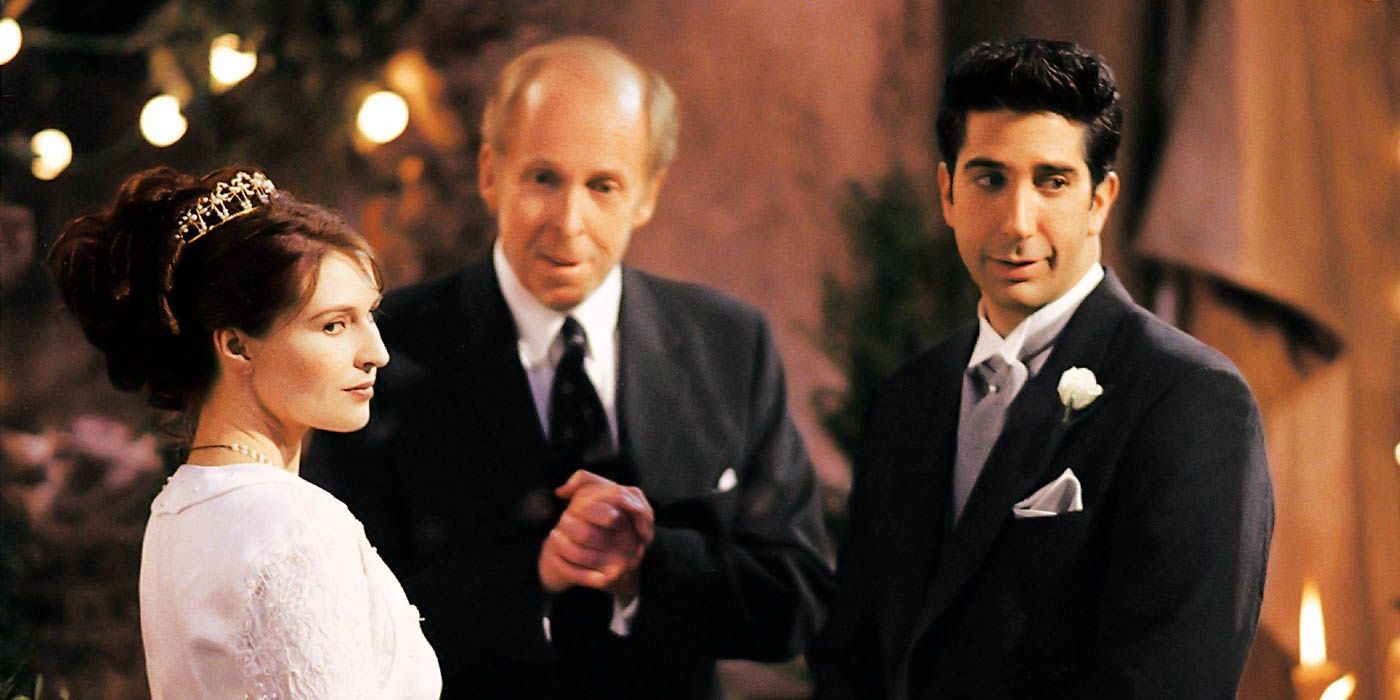 Moving onto the weddings of the main characters, Ross's second wedding comes in solidly in the middle of the pack. His first wedding (to Carol) happens before the series starts, and his second is to one of the most hated secondary characters on the show: Emily. After a whirlwind romance of only a few weeks, the two get engaged and pull off a last-minute (and surprisingly stunning) wedding in London.

RELATED: 10 Times How I Met Your Mother Copied Friends Directly

This is a major moment for a lot of the gang, as Rachel decides to fly in and sabotage the wedding (then changes her mind at the last minute), Phoebe doesn't get to go because of her pregnancy (and gets upset about being left out), Monica and Chandler have their first romantic encounter, and of course, Ross says Rachel's name, and Emily runs away during the reception. 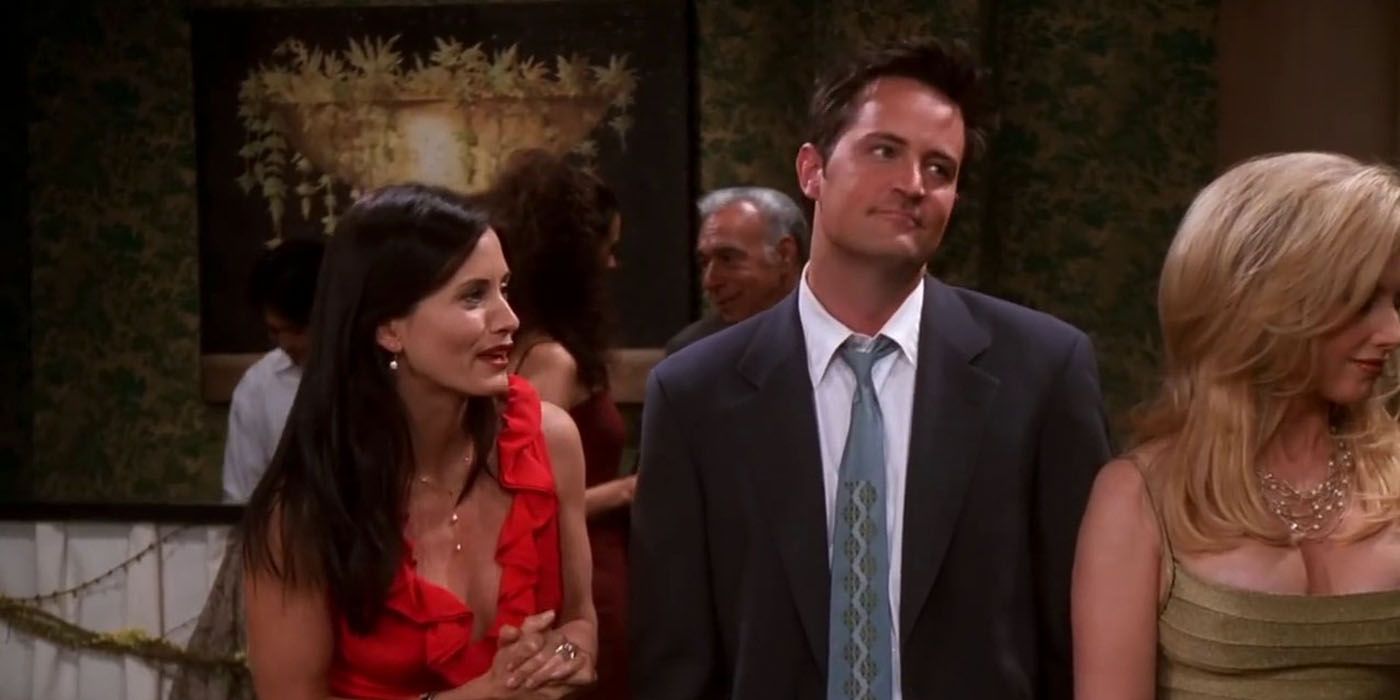 Monica and Chandler are the only couple to get a two-episode wedding, and both parts are loved by fans - although Part 1 doesn't get quite as high a rating as the actual wedding itself. In this build-up episode, Monica starts out by telling Chandler she is surprised he hasn't freaked out yet... so of course, during the episode, he freaks out about being 'The Bings' and that 'The Bings have terrible marriages'. The episode ends with him going missing, and everyone trying to either find him or keep Monica in the dark about it... and with Phoebe finding a mysterious positive pregnancy test in their bathroom. 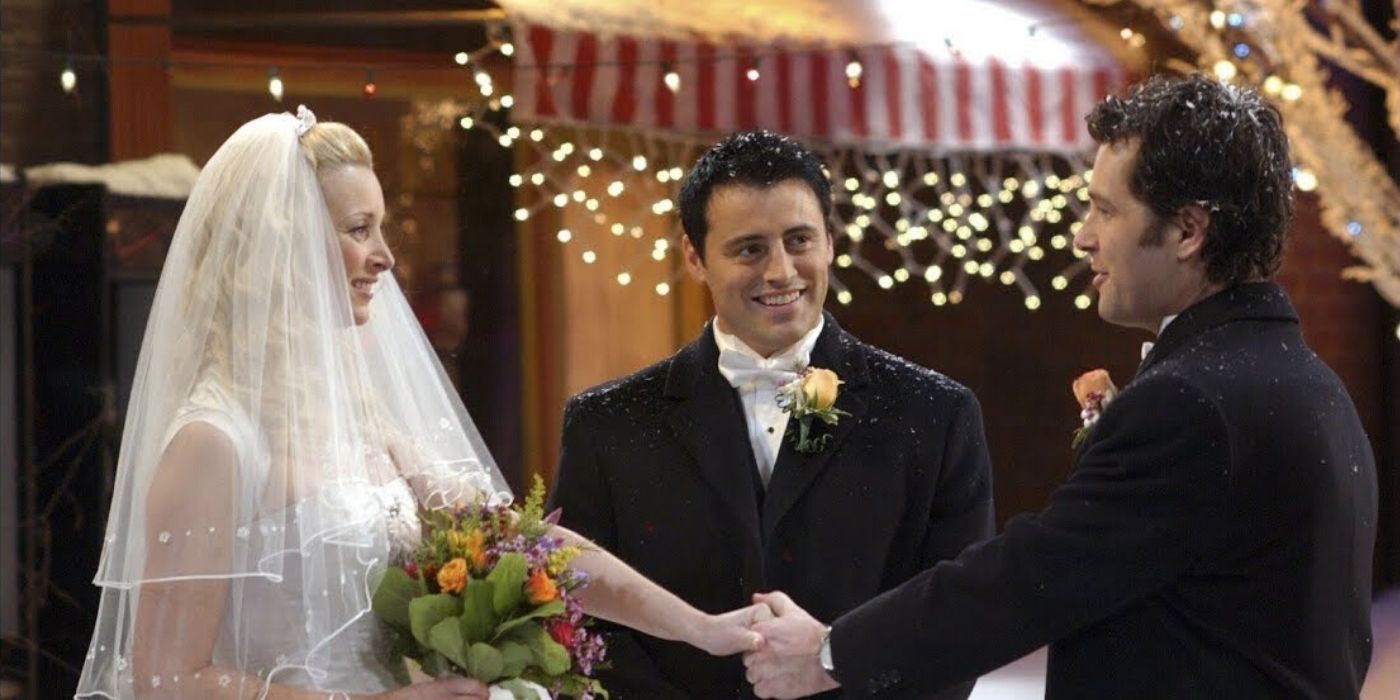 Mike is introduced to the gang in season nine, but despite his relatively short time on the show, fans absolutely loved the episode where he and Phoebe get married.

RELATED: 10 Friends Guest Stars Who Are More Popular Than Ever

This is a bit of a trope for sitcom weddings, as everything goes wrong (a blizzard, an ice sculpture delivered to the wrong place, Phoebe's stepdad can't get out of prison, the minister can't get there...), but they end up getting married in the snow outside Central Perk in a sweet and simple ceremony that is just perfect for Phoebe.

Ross and Rachel's wedding isn't a lavish and carefully planned affair - but a drunk mistake in Vegas. That doesn't stop it from being one of the most-loved (and funniest) episodes of the show, of course. The gang come to town to see Joey, but Ross 'pranks' Rachel by drawing a mustache on her face on the plane. When it won't come off, she refuses to leave the room, and the two end up getting incredibly drunk from the minibar... and wandering off to get married. Chandler and Monica are also intending a potential surprise wedding, but their plans are thrown off by seeing Ross and Rachel there, and of course, the fallout the next day is hilarious. 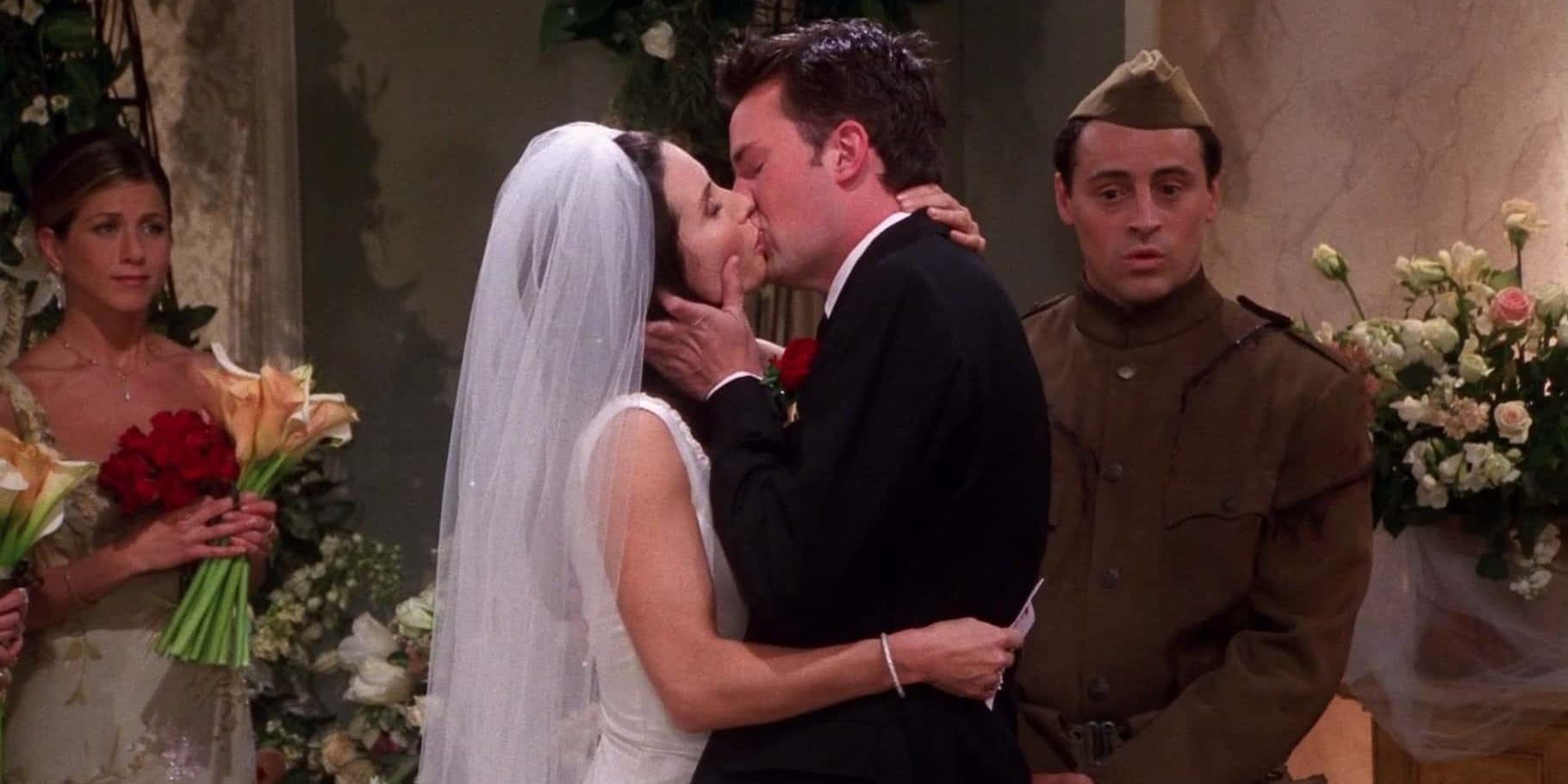 Finally, the most popular wedding in Friends is the moment that Chandler and Monica actually say 'I do'. There are the usual speedbumps - Chandler ends up thinking Monica is pregnant, Joey (the officiant) ends up presiding in a World War movie costume, Rachel is actually pregnant and hiding it, and they nearly miss their ceremony. But at the end of it all, fans get a sweet moment with all their favorite characters coming together, big moments for everyone, and a sweet exchange of vows. 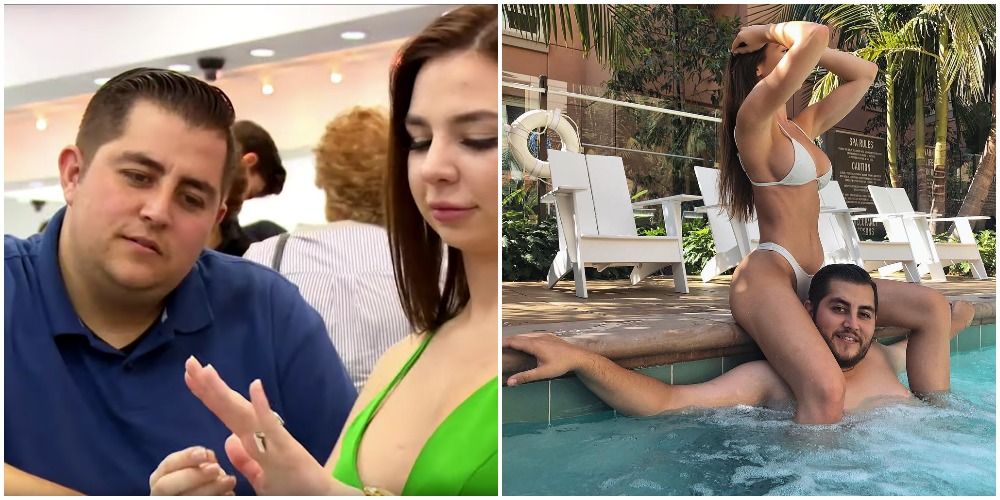 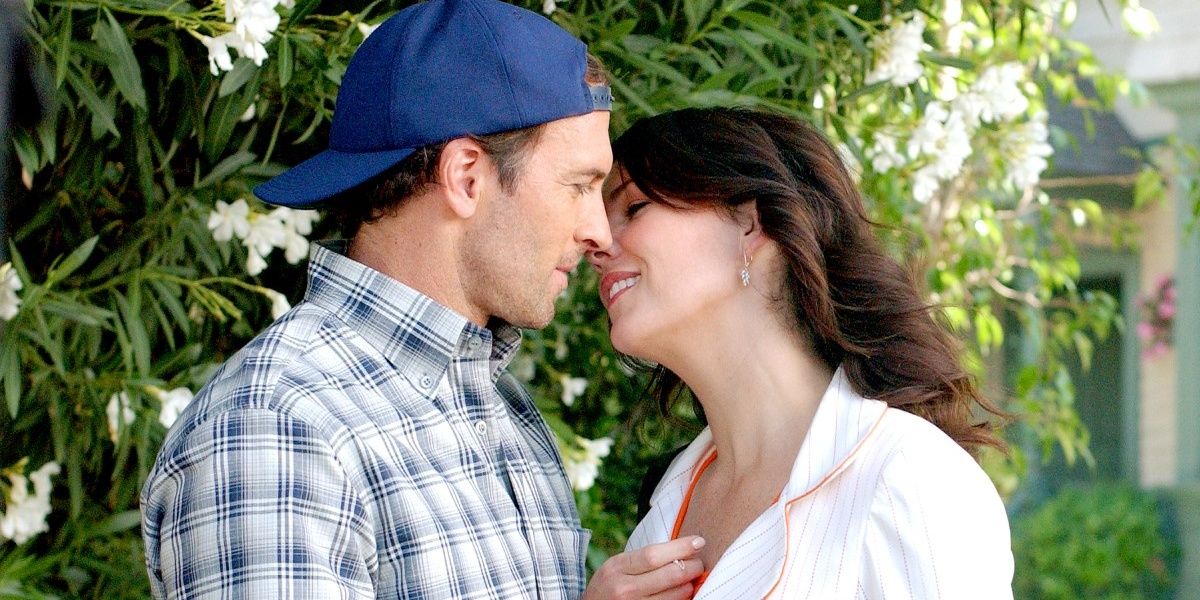 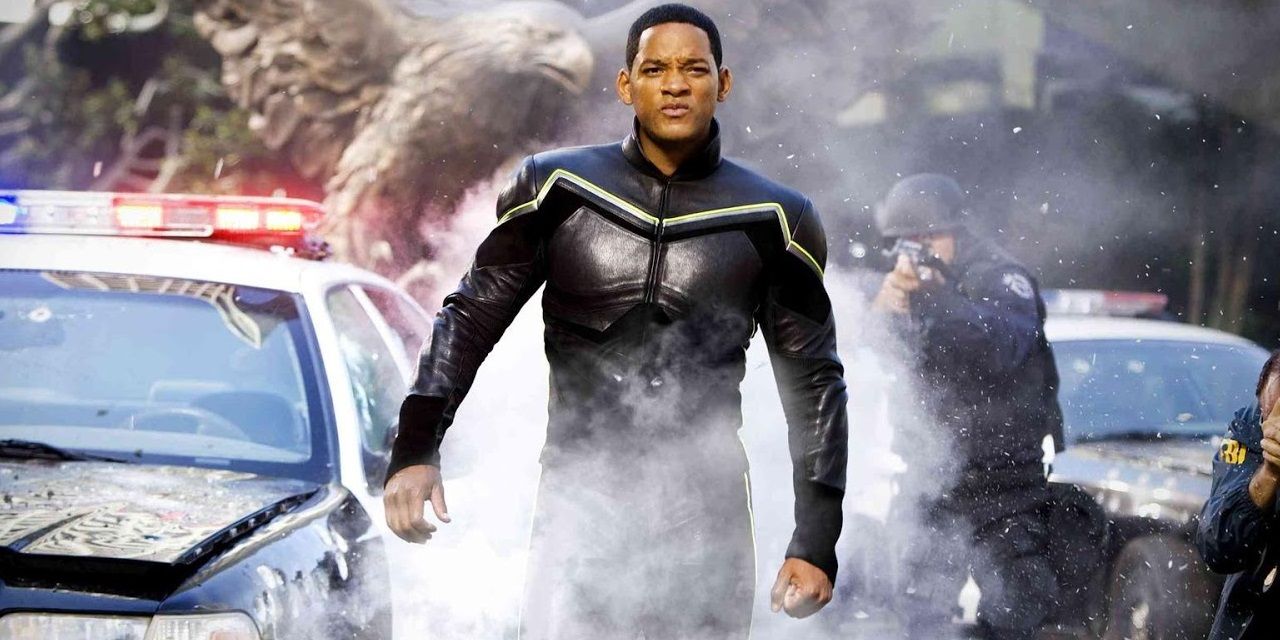